Karen and I visited a cousin in Montgomery and then spent a couple days enjoying Alabama.  In Prattville, we had breakfast with my old (95 year old) Navy Commanding Officer, Capt. Marvin “Jack” Smith.  He joined us with his daughter, Karen (in photo below), who married a Spaniard and lives and teaches in Spain while raising her family there. I encouraged her to tell her students about the great Spanish influence on our Gulf Coast - like DeLuna and Galvez. Karen helped me recall the Family Moto for Galvez that says "I ALONE" in Spanish. Well, after all she teaches English for the Spanish students at her school. "YO SOLO" she said. Few realize that what Galvez did at Pensacola had a direct affect on the American victory at Yorktown ! She and her husband are both educators and love where they live in Spain. Close to France - the sea and the Mountains. 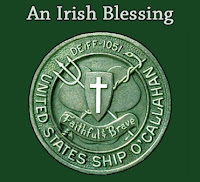 It is always a pleasure to catch up with Capt. Smith.  His daughter’s family was home on vacation for the summer. Jack and Martha enjoy the grand-kids. Martha is facing health issues that keep them close to home and family is always a grand comfort.  Jack met Martha when based in Montgomery in the late 1960’s after a tour in Vietnam - in-country with an RVN Vietnamese propaganda unit.


As he tells it in the video interviews, He volunteered for hazardous duty with an eye to ending his pain over the loss of his wife, Joan Merriam Smith to an air crash.  He was actually very near to retirement at that time. He is a WW2 veteran after all.  The Smith’s had a plan to start up a lucrative “time-share” corporate aircraft business.  All was roses. Joan had just completed an Around The World solo flight on the path of Amelia Earhart.  She was famous. Financial backing was a done deal.

Then --- tragedy.  While flying over the Sierra Range in California, Joan and a writer who was doing a book on Joan Merriam Smith the Aviatrix - both died when the plane lost a wing in turbulent air.

The granddaughter of the writer who died in the crash, Trixie Ann Schubert , is Tiffany Brown. Tiffany was doing research on her grandmother and Joan Merriam Smith with hopes to complete her grandmother’s book and tell the rest of the story. In her 2017 research, she discovered the videos I made of Jack.  Contact was made. Jack had a lot to add to the story. He and Tiffany are in touch - meeting goals to find information needed. (THE BOOK IS NOW IN PRINT "Fate on a Folded Wing")

One book that exists on the topic is “Racing to Greet the Sun: Jerrie Mock and Joan Merriam Smith Duel to Become the First Woman to Fly Solo Around the World" . Her  rescued book will focus more on the Joan side of the story (by her grandma). Tiffany transcribed some of her grandmother’s tape recordings into a book -  Before and Behind the Iron Curtain available as an E-Book. The recordings had a purpose and Tiffany rescued them.

Life began again for Jack.  At first with a dismal outlook.  Then Vietnam. Then Washington DC, and Montgomery and he met Martha. She gave him hope and purpose. They were virtually newlyweds when he took command of USS O’Callahan, which is where I met him in late 1971.  As a very green Ensign. At that point I think they had one very young child. They also have a son.

Jack had already taken the ship into combat supporting troops ashore and his next task was to get the ship refitted with upgrades for the next deployment, and the next C.O.

He was a commander at that point with over 20 years service. He began his Navy career in WW2, enlisted and worked the entire war without combat - working with a team to develop drone bombers.

Having command of a ship and engaging the ship in combat filled a gap inside him that existed from WW2. My own combat deployment followed in 1972 with Capt. Bill Dunham as Commanding Officer. Jack had a few more years with the Navy and consulting with shipbuilding in Pascagoula, MS. His children were raised mostly in MIssissippi. His daughter Karen, is a graduate of Ol' Miss. She and her Spanish husband teach near Barcelona, Spain.
Jack and Martha retired to Prattville, AL.

My Karen and Jack's Karen with Jack at IHOP in Prattville


Karen and I remembered Martha as the genteel Southern Lady, a young mom, whom we met at the Smith’s home in San Diego.  Karen especially appreciated the “sound of home” since Martha spoke the same language of the South as she. It tugs the heart to see Martha struggle now with frailties.  The children and grand-kids are always up for a visit - even from Spain - and bring comfort to a Southern Mom.

Besides savoring visits from family, Jack is an active volunteer builder for Habitat for Humanity. He does this several days a week. One or two days a week he plays golf. He is deeply involved with his church. He and a group of men have been meeting for a prayer breakfast in Prattville for over 30 years now. He actually missed the breakfast this time to share breakfast with Karen and I and his daughter, Karen. We did have a blessing. And we had a short prayer to commission a few copies of our ship's crest on a coin.
(see below)

All that -- And he cares for Martha.  For someone who ran into so much tragedy in life, he is an example of pushing through.

I and my shipmates who served with him recall him with the greatest admiration.  We can only hope his shadow that we served in, has given us the resolve to be better.  That is what leaders do.

Karen and I enjoyed the breakfast and then motored on over to see Moundville, AL where civilizations came and went in the centuries before Europeans found this paradise.

Here are Jack and Martha a few years ago when Karen and I stopped in for a visit. It was 2011, I think. It was the first time I has seen Capt. Jack since early 1972.

How often can you photo-bomb your C.O?


The coin .... with the ship's logo and crest of cross and shamrock for Fr. O'Callahan, is used in passing along a prayer for a veteran or anyone who needs a bit of hope.  The "Irish Blessing" is bestowed on the person who says the prayer.  It all connects with a tradition of remembering the USS Franklin and Fr. O'Callahan, since they are tied to the heritage of the USS O'Callahan. (see also - A Ship and It's Seal) 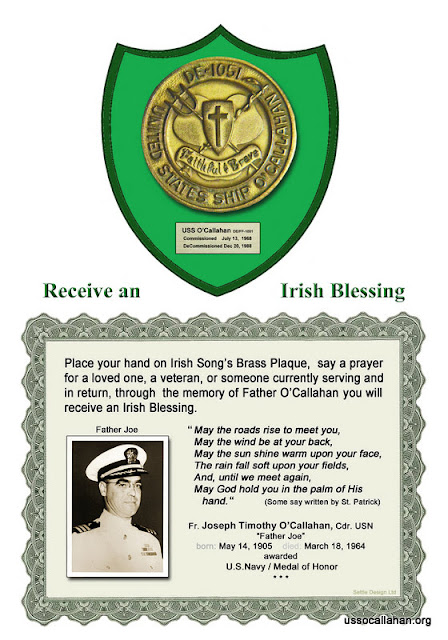 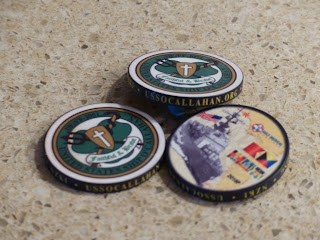 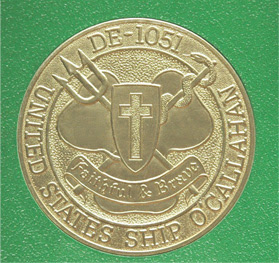 I served on USS OCallahan under Captain Jack’s leadership from 1971-72 as a Sonar Tech. After previously serving on USS Sterett, the OCallahan phenomenal. It was a great crew and great leadership.