A Marine's Concierge to the County

It is not unusual for people to move to this county and not have a clue where ANYthing is for years afterward.  Too many irons in the fire, I guess.  A few weeks ago I met a recently widowed octogenarian Korean War Veteran at a local computer store.  Dick Miller has become a friend and a project. It is my pleasure to bring him around to find some of the key landmarks of our county..... 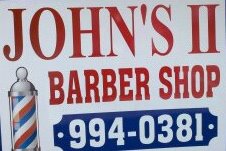 Today -- we got our hair cut at the JOHNS II Barbershop in Pace.  Many veterans, like Mr. Miller, enjoy that barber shop for the kind of cut but also the kind of customer. They feel at home there.  My cousin, Rogene Kilpatrick introduced me to the shop about 10 years ago when we moved back here. Even as he lay dying , his barber, (Dee) came to him at home to cut his hair.   It turns out - Dick Miller and my Cousin, Rogene ("Pat" Kilpatrick) were in the same Marine unit in the Battle of Chosin Reservoir in Korea.  Rogene was in Co. H (HQ Co as radio central) and Dick was in Co. G - an infantry company.  Miller wears a Marine Veteran cap. "KOREAN WAR VET". It has 3 purple hearts on it. I overheard a part of his story. His  survival can be classified as a miracle.  It think Korea left a dark hole in my cousin Rogene too. This item was found in his effects after he died.

Ken Misenheimer of Milton was his barber today. A Navy veteran  .  Dick said he has not had such a great haircut since ... (he could not remember).  He recalled in Korea - the Marine platoons were given hand operated shears to cut off hair when they came in from "the line".  He explained how difficult it was to operate and he appreciated the work of a good barber.   I have asked Ken to help me get Dick Introduced to some people in his church and see if he won't enjoy their meals and gatherings. 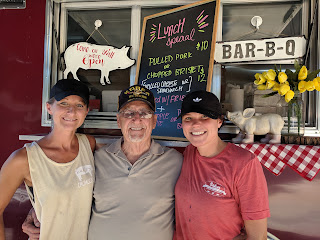 We drove to the Landing near the Springs and I explained the Fort Mims Massacre and that is why David Crockett was at this very spot in 1814. Crockett was scouting against the hostile Creeks with his allies - the Choctaw.


We drove to Chumuckla for a picnic BBQ lunch at Oake's.  I learned from Katy they are going to go to 4 days a week in four different locations now.  Tue at Milton, Wed at 5 Points, Thurs at Elyssa's, and Fri at Oakes in Chumuckla (but maybe soon at the crossroads). 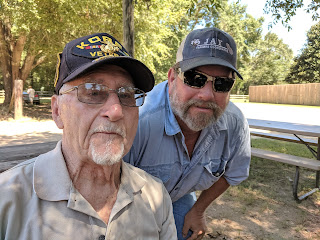 While at Oakes we talked to one of my cousins, Moo Brown -- who I  must have met before since he is such a pleasant fellow - but this meeting refreshed my memory. Moo descended from the same Scots Campbells who pioneered in Chumuckla in 1820.  His Granny Hawthorne was a Campbell .  Moo is a fascinating fellow who works with the University of Florida Agricultural Experiment Station .  And he likes BBQ.


I had to get Mr. Miller back to  Milton but I forced him to visit Hall's Hardware  with me on the way back to his car.  We got a complete tour - just by asking.  Even included gift certificates.  Mr. Miller was amazed.  I'm sure he will be back.

I am going to help him find a source of lumber 24" square and 1-7/8 " thick to use for special designs in a new CNC (laser wood cut ) machine at his Son's house near Whiting Field. Several local  sawmills might have it in pine or juniper. He needs a supply pretty soon.


In learning about Mr. Miller - one discovers eventually that he is a PhD Polymer Chemist and PhD Chemical Engineer and BS History graduate. His career involved serial inventions and entrepreneurship with over 300 patents. It is an amazing story of survival and thriving in America.

UPDATES over time:
Recognizing one of wounded at NAS Pensacola attack.
A visit with Marine Legend in Milton - Red James
Veterans Day with some Corpsmen and a Marine
Insight to Dick Miller - Facebook post
Coffee time and checking on the wounded.
Young Marines share with Old Marine
The Shooting Range with Miller
CHOSIN Battle Documentary Night with Dick  FB POST
Some Retrospection at Duramed for Lunch
BASEBALL Retrospect with RIchard Wood

At a loss for words! Was not aware you were writing my biography.